Stephen Cirell Consultancy Ltd operates from the first Passivhaus to be built in Leeds and the 1,000th to be registered in the UK. The following is an extract from the Yorkshire Post of 9 February 2019, outlining this achievement.

This solar powered home is a first for Leeds

The first self-build in the Leeds area to be officially registered by the Passivhaus Institute is testament to the owner's tenacity and attention to detail.

Stephen Cirell paid little attention to the efficiency of his home until his career led him into the energy sector. He began to realise that his draughty period house, which had no cavity wall and no double glazing, was losing a large percentage of its heat through the walls and windows. 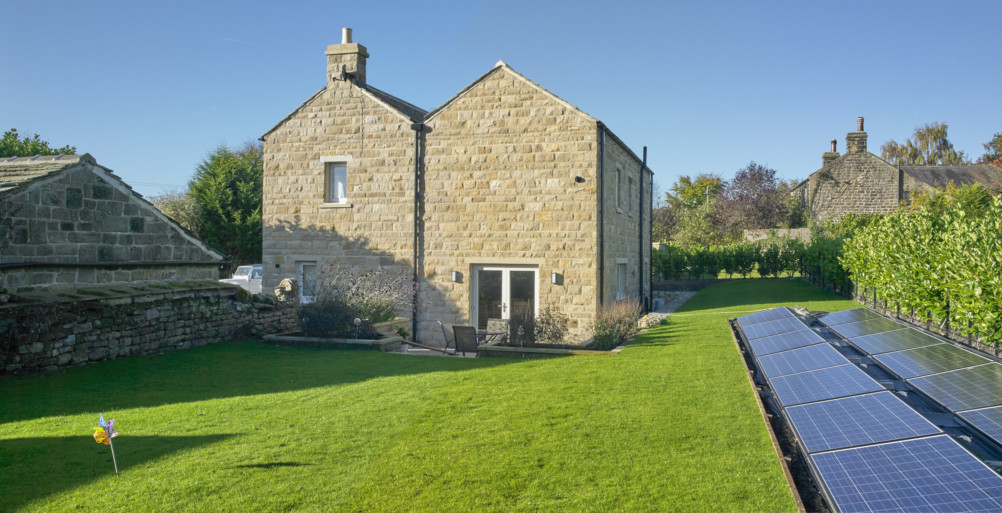 The solar panels on a rack in the garden provide all the electricity the house needs and what isn't used is stored in a Tesla battery.

"My work sparked an interest in the thermal performance of property and I realised that the only way of getting a truly energy-efficient house was to build my own using Passivhaus principles. Climate change was also a big driver and my aim was to use no fossil fuels," says Stephen, an author and consultant on low carbon and renewable energy projects.

Passivhaus is a building performance standard invented by the Germans. It is based on reducing heating demand to a very low level so that running costs and the effect on the environment are minimal.

One of the guiding principles is "fabric first" construction. Supreme airtightness is a must as are triple-glazed windows and doors and the highest levels of insulation. Body heat, heat from cooking and showering are all utilised via a mechanical ventilation and heat recovery system. The MHVR also ensures that stale air is exchanged for fresh, filtered air.

However, getting full Passivhaus Institute certification is notoriously difficult because of stringent compliance tests. Stephen wasn't deterred and thanks to his tenacity and attention to detail, he now has the first self-build in the Leeds area to be registered as a true Passivhaus. His cottage is also the 1,000th Passivhaus to be registered in the UK. 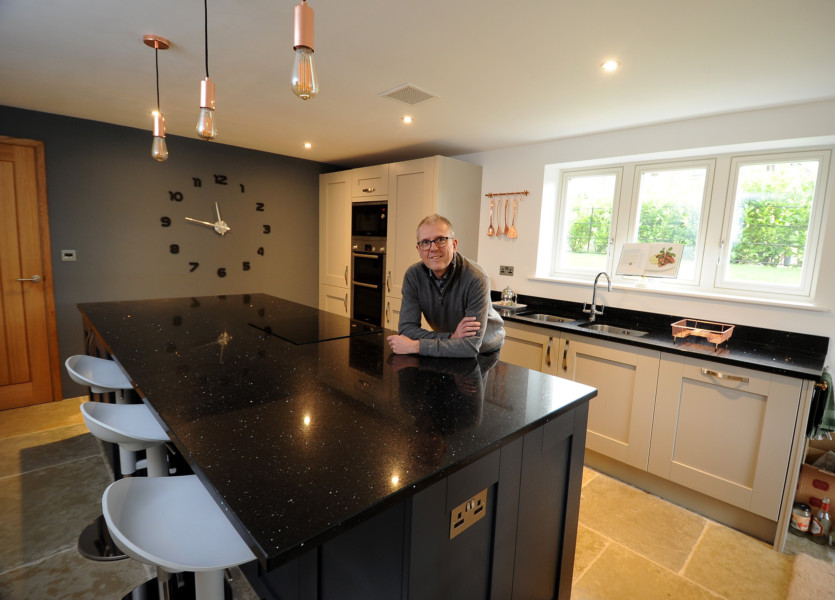 Stephen in his kitchen with cabinets and appliances by Kitchen Design House in Wetherby. The pendant lights are from Heal's at Redbrick Mill, Batley.

It is a major achievement but the journey from inception to completion took four years and the first challenge was finding a plot. It took Stephen 15 months to discover a derelict two-bedroom cottage in a north Leeds village that was ripe for demolition to make way for his eco home. It took another 18 months to get planning permission.

His luck turned after being quoted £12,000 for the demolition as he managed to find a builder to do it for £1 in return for the old stone. He also found an architect and a builder with experience of Passivhaus design and construction.

Eric Parks, from Buckrose Ecological Architects in Malton, and I&C Watts builders, of Harrogate, are both respected experts in this field. "A lot of Passivhaus projects fail when the architects and builders have no experience of it. It's very different to conventional design and construction," says Stephen, whose main hurdle was dealing with the planning restrictions imposed on the property. While he wanted a contemporary house, the planning authority insisted on a traditional look and on the use of Yorkshire stone, a stone slate roof, chimneys and smaller windows.

The house has high levels of insulation in its cavity wall.

Architect Eric Parks says: "It was a challenge to achieve Passivhaus standards within the limiting restrictions on the external appearance. Larger windows were out of the question so we had to use smaller areas of glazing, which meant lower solar gains and slightly more heat loss.

"We managed to balance this with a combination of increased levels of insulation in the roof and internally insulating the outward opening window frames."

The easiest part of the project was the build and fit-out of the three-bedroom house and garage, which took a year and went very smoothly thanks to the experienced builders.

"They were brilliant. They knew exactly what they were doing because they have built five Passivhaus properties before they did mine. When the house was tested it got one of the highest ever air-tightness ratings. To comply, you have to get 0.6 and this house is 0.1," says Stephen, who also chose his flooring and furnishings carefully so they contain no formaldehyde. 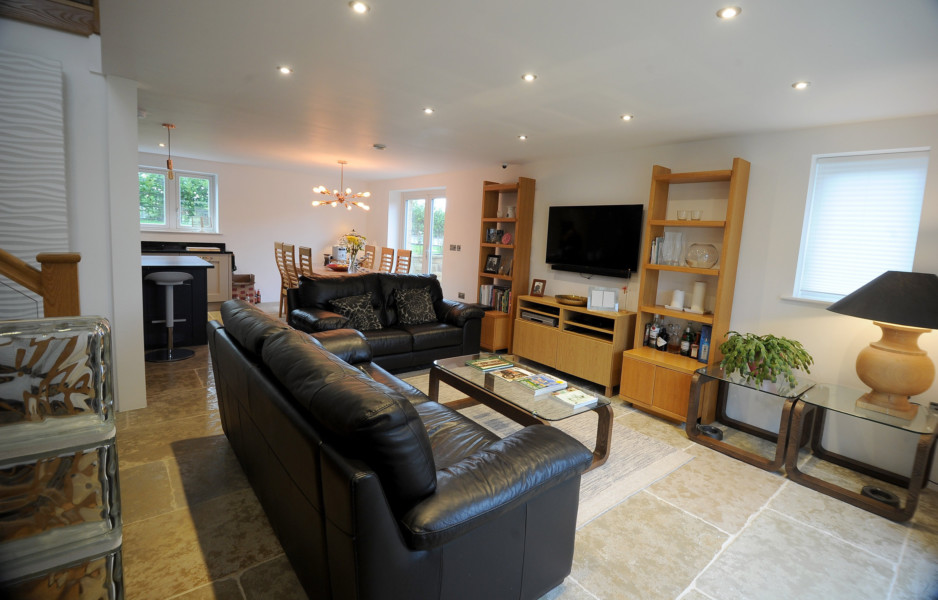 The open plan living space, which is warm as toast thanks to the property's air tightness.

The construction is stone and breeze block with a cavity packed with insulation. The walls are plastered rather than plasterboarded and all joints in the house are taped to prevent draughts.

The Green Building Store, near Huddersfield, supplied the triple-glazed timber windows and doors and the MVHR heat recovery ventilation system.

Mr Parks added: "We chose the Green Building Store because we had great confidence in their knowledge and expertise for Passivhaus projects. The MVHR system is functioning really well and is virtually silent in operation."

A Mitsubishi air source heat pump was chosen for the minimal heating and hot water requirements and there is just one radiator in the whole house. Electricity is provided by a £6,000, 5kW solar PV array in the garden, laid out on low level racking. The electricity from the panels can be diverted in four ways: to the house, to battery storage, to the heat store or to the grid.

The system has been set up to ensure that if an appliance in the house needs power, that is supplied; if there is no call on the electricity, then it is diverted to a £6,000 13.5 kWh Tesla Powerwall 2 battery in the garage.

When the battery is fully charged, the power is diverted to the 300-litre water heat store and when the water is heated to the maximum temperature, it is exported to the grid. This cascade system means that the maximum value from the solar power is extricated for every kWh generated.

It ensures that the use of renewable energy is optimised and Stephen has a home that uses no fossil fuel. He also uses an electric car to further minimise his impact on the planet.

"As a specialist in renewable energy and an active consultant in the industry, I wanted to create a high quality eco house and Passivhaus standard did not disappoint," he said.

"I am enjoying the benefits of living in a well-designed and extremely well-built home that has minimal impact on the environment."

It also looks likely that the house will cost nothing to run and he will be "bill free". The build, fit-out and renewable energy elements added up to £350,000, though this does not include the cost of the plot. The property has since been valued at £750,000, which leaves Stephen in profit.

A Passivhaus generally adds up to 20 per cent to construction costs but this is offset by very low running costs. Economies of scale also play a part and a large development of Passivhaus homes may cost only five per cent more than average.

"The heating and lighting bills at my old house were £3,000 a year and this house should cost nothing to run. I think this shows that Passivhaus and renewable energy sources are the way forward. It is what people want," says Stephen.

"The problem lies in the culture of the building industry and in the skills required to build this way but I think we will see a change for the better over the next ten years."